This is a story that only a few people have heard. It is sensitive, but it is a small part of a huge victory.

This year I turn 27. It has been ten years since I started Year 12 as a nervous sixteen-year-old.

Ten years. This is significant, because I never expected to live past that year.

When I was fourteen, I started to get sick. Though the illness was mental and emotional, my physical deterioration was by my own hand. It was almost a game in the beginning, an experiment with my body that spiraled into addiction. It wasn’t long before I had a broken and bleeding relationship with food, and had lost a noticeable and unhealthy amount of weight.

My parents are extremely attentive and loving people. They noticed very quickly, and dropped everything to get me help. I saw this only as disappointment and discipline, and bucked against it.

I regained the weight for a while, but my heart had been infiltrated by something dark and destructive that sought to isolate and injure me. Around me, my brothers and my friends were excelling – finding the things they were born to do. I felt like I had tried everything. Every sport, every hobby, every subject. My eating disorder had interrupted my pursuit of dance, the only thing that served as self-expression. I didn’t study drama – I wasn’t confident enough.

I felt like I spoke a different language to the hundreds of human beings around me. I had fierce anxiety, and my creativity was beginning to be poisoned by themes of pain and death. I had previously flourished academically, but I started pretending I was unwell whenever I had a subject that I was disconnected from. I had no urge to try. My body disgusted me – I found every aspect of it useless. When I ate, it hurt. I could feel each bite of food in my digestive system. I would spend hours huddled after each meal, trying to devise ways of removing it, or preventing the feeling in the future.

One night, in desperation, I pain-stakingly cut an ‘x’ into my hand, to remind myself not to eat. It was a punishment and a warning. It didn’t work.

My parents were doing their best to monitor and protect me, much to my fury. When they discovered that I had been cutting my body, they moved me to the bedroom next to theirs, in the hope that the closer I was to them, the quicker they could intervene if things got out of hand.

This behavior continued, and the cloud around me grew more opaque. I could not see out, and even those closest to me could not see in.

When I reached my final year of high school, my weight plummeted yet again. This time, I did have aspirations – but they were only within the limits of my disease. I would lose weight, until I perhaps weighed nothing at all. Until I did not burden the earth with my heavy tread upon it. It wasn’t so much a death-wish, I just understood that to achieve what I wanted, I would most likely die in the process. Nothing else mattered – no other goal, no other person. I had no purpose on the earth except to leave it. I walked around my school like a ghost, holding a calculator, adding and subtracting the kilojoules, only interested in the mathematics of my own disappearance.

When they admitted me to hospital, my fingers were purple, from how slow my heart was beating. The photos show a strange scarecrow of a child, smiling at the camera, terrified and breakable.

My mother came to visit me every day. She braided my hair and helped me continue Year 12 from my hospital bed, my nasogastric tube tucked behind my ear.

I gained weight, was released from hospital, and finished school with a high grade – completely due to the love and care of my brothers, parents, extended family, boyfriend, friends and teachers who came in to see me. They treated me like an intelligent, beautiful woman with the potential to get through not only just another day – but an entire lifetime.

And I did. I have said it before, but I found that leaving school was like seeing past the ozone layer, and discovering that an infinite universe lies beyond it. I started dreaming. I slowly started seeing small, beautiful things. I started to write again. I had hope and ambition, but the wound remained. I hated how I looked and how I felt. I hated my vessel, and no matter where life took me – from my psychology degree to acting school to the sets of exciting acting jobs – I felt the burden of my body continue to weigh heavy on the earth.

I remember a journalist once trying to pry a story out of me, a year or two after I had done partial nudity for an acting role – then writing an article in the Sydney Morning Herald titled ‘Curvy Actress Bares All’. When I read it, I sat in my car crying for an hour.

It seemed like I was always going to be broken, that it was never not going to be exhausting. I would have good weeks and bad weeks. My relationships were injured by the secrets I kept. I wasn’t dying anymore, but the hole in my heart only grew.

This was no coincidence, but it came as a complete surprise.

I can’t leave Jesus out of this. Sometimes I wish I could. Sometimes I wish I could tell the story of my recovery like a recipe or equation for everyone else caught in the horrible cycle to read and then follow. It wasn’t like that. Jesus is a dirty word for many people – it certainly was for me. I don’t want to offend you. But I’m not ashamed, either. How can I not talk about it?

I had the kind of encounter that is undeniable. The kind of slap to the face that changes a universalist, vocally anti-Christian intellectual into a humbled young woman, eyes wide, on her knees with her head bowed. It happened to me, reluctant as I was. And perhaps one week later, I woke up, and I looked at my body in absolute awe.

It was beautiful. It was a temple. That day, I ate, and I felt energised, satisfied. But the most prominent change was that I stopped thinking about eating and food. For what felt like the first time, I thought about the world – about other people – instead.

I listened to my body – whom I felt I had met for the very first time. I asked her what she needed, and then instead of berating her or denying her, I gave it to her. If she needed rest, she received rest. If she needed chocolate, I gave her chocolate. Spinach, I found her spinach. And slowly, as I loved her, as I took on the responsibility of her care-taker and friend, my body began to trust me again.

I haven’t thought about this for a long time. Other parts of my journey, similarly dramatic, often seem more relevant. But this morning, the grace enveloped me once again.

Two nights ago, in prayer with my housemate, we asked God to give us visions of the current circumstances we were in. I had a vision of a lamb.

The lamb was wounded at the neck – it should have been dead but it was somehow brought back to life. The vision then changed to the resurrected Jesus, holding out His hands with holes in them.

‘Now Thomas, one of the Twelve, was not with the disciples when Jesus came. So the other disciples told him, “We have seen the Lord!”

But he said to them, “Unless I see the nail marks in his hands and put my finger where the nails were, and put my hand into his side, I will not believe.”

A week later his disciples were in the house again, and Thomas was with them. Though the doors were locked, Jesus came and stood among them and said, “Peace be with you!”

Then he said to Thomas, “Put your finger here; see my hands. Reach out your hand and put it into my side. Stop doubting and believe.”

When we believe and publicly declare it, our broken selves die alongside Jesus, and we rise spiritually from the dead– restored. As I had that vision, it reminded me that although we are healed, we still bear holes in our hands from where the nails went in. They are evidence of our testimonies. Proof that we came back from hell.

This morning, writing out this vision, I remembered the ‘x’ that I carved into my right hand over ten years ago. It is an old scar but it remains, clear to anyone who might look closely. A couple of years ago I had prayed over it intently, in the hope that God would remove it. He didn’t. I remember peering at it, hoping to see clean skin, and seeing those two jagged lines in an ‘x’ yet again.

This morning I looked at it, and there was something different about it.  It was as if somehow, over time, the lines had grown and changed. It now seemed vertical. One line longer than the other. I couldn’t believe it.

It was a cross.

What was cut into me to remind me that I was a failure, now remains as a reminder that I am anything but. I am beautiful and free – powerful beyond measure. I cannot be destroyed. My scar is a reminder that I was once dead, and now I am alive. That though I thought I had no future, a brilliant future awaited me nonetheless. Love is relentless. Love is victorious. Through love, we can overcome all things.

There is hope. Tomorrow is utterly limitless. 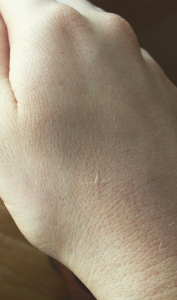 Anna is a writer, based in the Sunshine Coast, Australia. She can be found on Facebook under @annaweir, and on Instagram and Twitter under @annamcgahan.
See all posts by Anna McGahan

5 thoughts on “The Holes in my Hands”